How To Become A More Eco-friendly Vaper

As more and more people begin to realise the damage human beings have caused to the planet, the need to become more eco-friendly and sustainable as a species is as vital as it ever will be. This is highlighted through World Environment Day, which takes place on the 5th June every year and has been active for 35 years, aiming to educate and inform us of our duty to protect the planet at all costs.

Vaping is no different, as an industry it’s important to be as ecologically sound as possible. Already by choosing vaping over smoking, on average you’re saving 6 trees a year from being destroyed, which is approximately 352 trees over a lifetime.

We take a look at how as a vaper you can be as economical as possible whilst offering some helpful tips as to how you can reduce your environmental impact through your choice of kit and eliquid.

Moving Through The Gears

As a beginner vaper, it’s common that you will use a simple kit like a pod kit where setup and maintenance are minimal. This has its consequences, especially if it’s a closed pod device that requires you to keep replacing the pre-filled cartridge of eliquid.

Most closed pods require you to disassemble all of the components once used, wash out thoroughly to remove any nicotine residue, which can be  toxic when contaminated into recyclable materials, and dispose of appropriately. All of this is an extremely laborious process, not to mention rather hazardous with the increased risk of injury when disassembling, therefore closed pod systems remain one of the most environmentally perilous forms of vaping overall.

It also means every 1-2 days, which is approximately the time you go through a closed pod, you’re disposing of on average 9.7g of plastic which over a year equates to 2.3kg of plastic, the equivalent weight of an adult Chihuahua, surprisingly. As you can see, this is detrimental to the environment when you consider the sheer amount of people using this type of device and if the materials are non-recyclable, but it can be avoided. 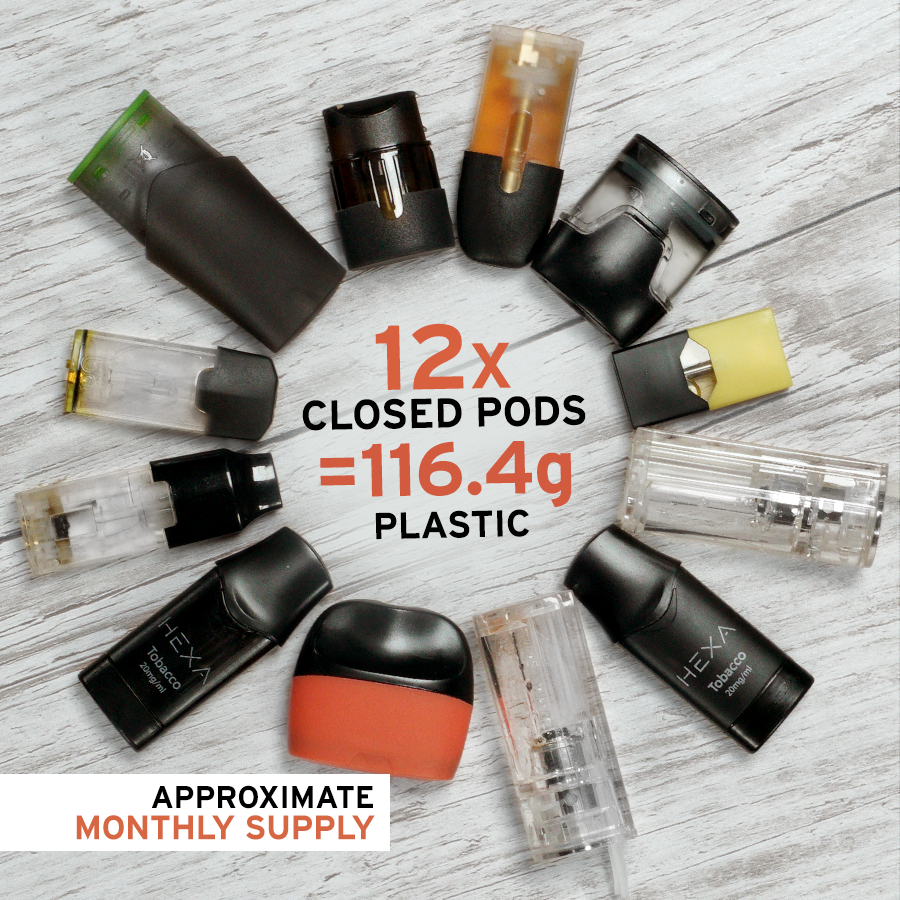 Having said that, if we compare directly to smoking, the environmental impact of using a closed pod device over tobacco is still huge with over 600 carcinogenic chemicals being pumped into the atmosphere for every discarded cigarette butt alone.

As an alternative, open pod devices are kits wherein you manually refill the cartridge yourself. If we were to apply the same method of calculating the average disposing of pods over a year, it would equal out to only 362g of plastic, remarkably making them over six times more eco-efficient than closed pods. Furthermore, you’ll dispose of your pods less frequently compared to closed pod devices as the built-in coils last a lot longer, on average needing to be replaced once a week. 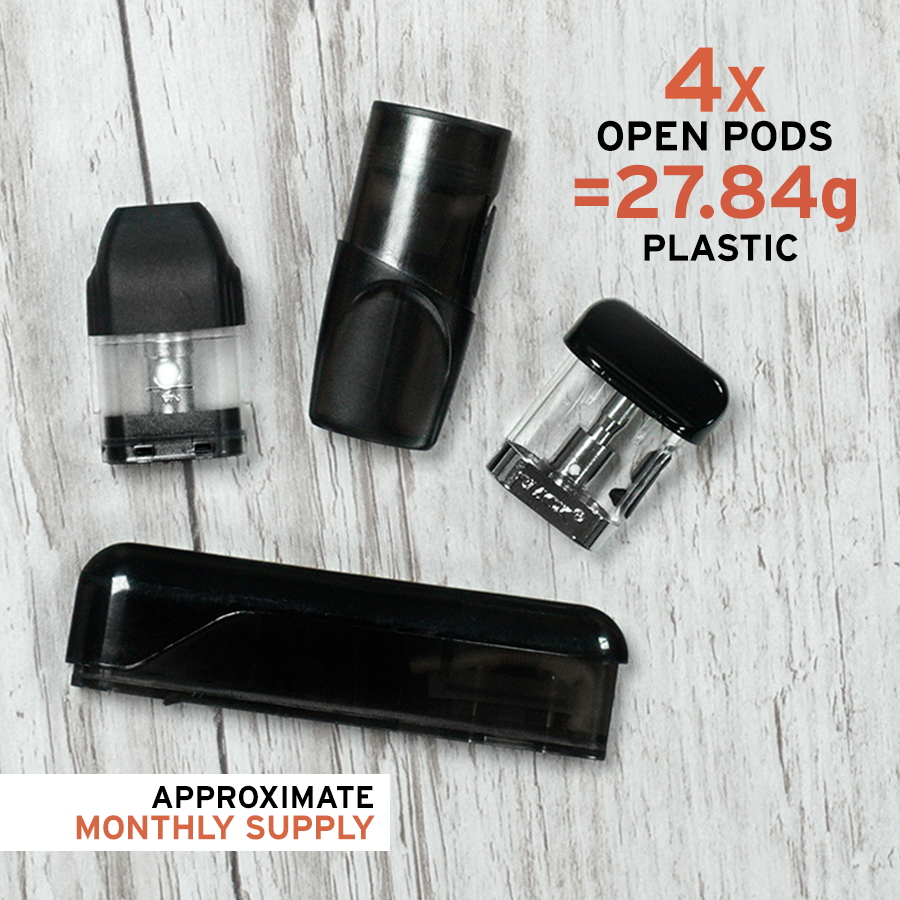 Obviously, this form of pod device requires refilling with eliquid which is more often than not stored in plastic bottles, however, all the bottles we stock at Vape Club are constructed from recyclable materials like PET. We’ll touch on this in greater detail later.

The next step up is to use a refillable tank device, meaning the only thing you’ll be disposing of is the replacement coil every few weeks or so as well as eliquid bottles. Coils are widely recyclable, usually consisting of some form of metal such as Stainless Steel or Kanthal as well as cotton, meaning wastage is reduced significantly.

Moreover, if your device uses removable batteries, there are plenty of disposable battery bins around, including one right here at Vape Club, resulting in your battery being cleanly and appropriately recycled.

Going even further, rebuildable atomisers in particular RDAs are extremely eco-friendly due to their metal construction, as well as the coils and cotton they use being recyclable.

It’s also worth noting that here at Vape Club, we do our utmost to recycle all materials and package 95% of our customer deliveries in Jiffy green bags which are not only recyclable but are also biodegradable, an even bigger step in conserving our environment for future generations.

Earlier we mentioned that all of our eliquid plastic bottles are recyclable, it’s worth noting they need to be rinsed thoroughly before being recycled due to nicotine being poisonous which would have a huge effect on our water supply and marine life.

Eliquid bottles remain the most widely consumed vaping product by some distance. On average, a standard 10ml bottle weighs 8.4g, coupled with the logic that the everyday vaper expends a 10ml bottle of eliquid every 5 days, it would equal out to 613g of plastic being recycled per year. 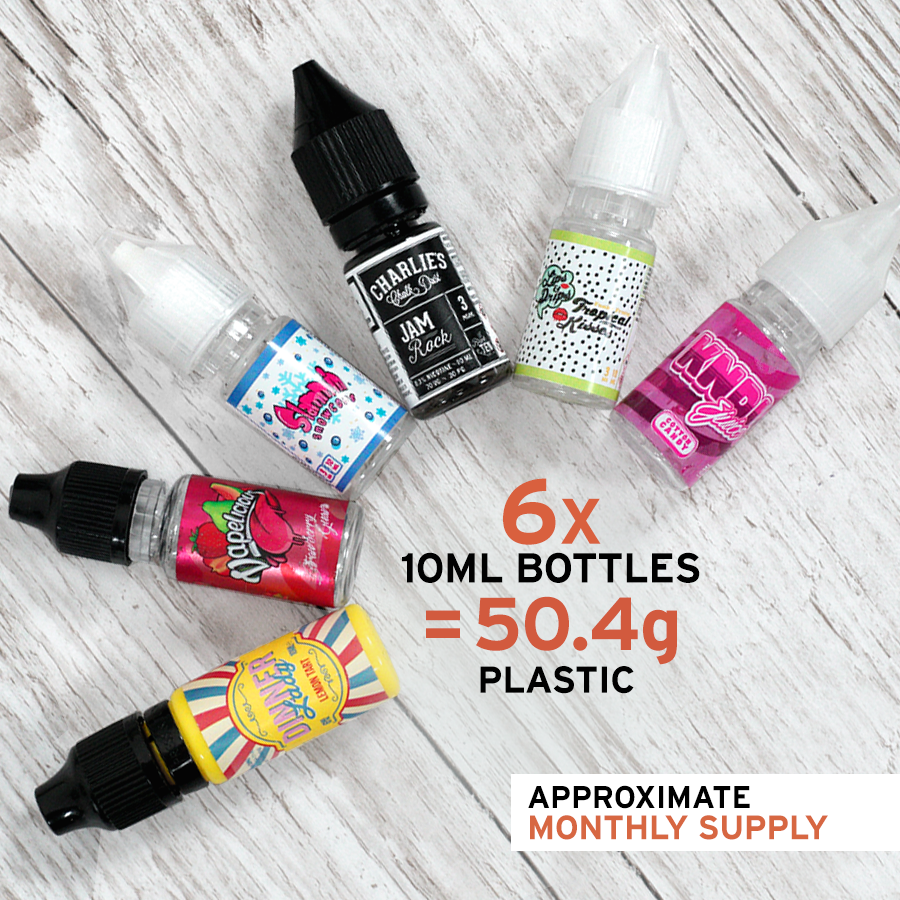 For those who prefer shortfill eliquids, a standard empty 60ml bottle weighs out at 16.4g which taking into account that the common vaper goes through a 60ml shortfill around once a fortnight, approximately 426.4g of plastic is recycled each year. 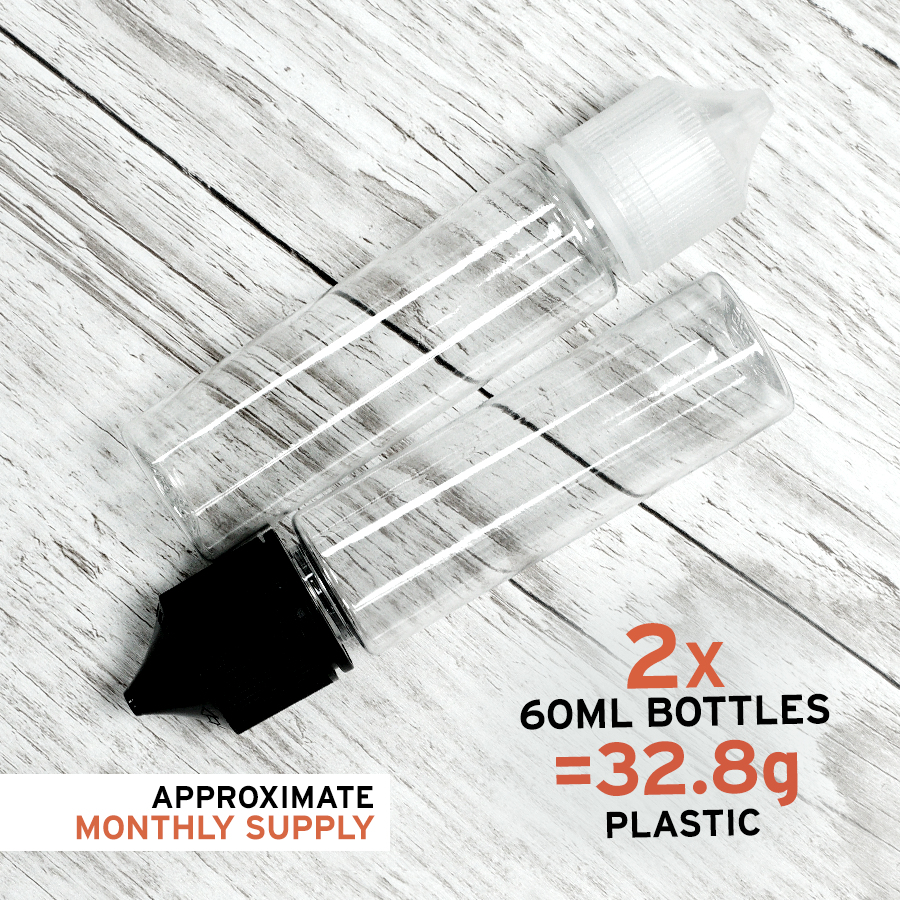 Additionally, the majority of users mix shortfills with 10ml nicotine booster shots, which when applied to the same formula of being consumed once every two weeks, 218.4g will be combined with shortfill bottle consumption, totalling out at 644.8g per year for shortfill users.

All of these statistics may seem quite baffling and will no doubt vary according to your specific vaping regime, yet it’s important to know that if every vaper followed these tips and catered their consumption and habits to respect the environment it would have a hugely beneficial effect on the planet overall.

There are always more ways to reduce waste and protect the environment and it’s safe to say that as a species we are some way off from being as ecological as we possibly can be. Here are a few extra hints and tips in taking that extra step to preserve our ecosystem:

One of the biggest causes of climate change is the overuse of fuel worldwide with around 54 million litres of fuel being burned away each day across the planet. One way to reduce this is to buy your eliquids locally in the UK, decreasing the air mileage and transportation as opposed to US or European produced eliquids. We stock an extensive range of UK manufactured eliquids from a variety of esteemed brands including Vampire Vape, Dinner Lady and Large Juice.

Vape kits can serve different purposes, specifically advanced mods and tanks, which have compatibility with a host of output modes suited to users preferences. For example, a mod with a Variable Wattage mode can be used with a range of tanks meaning you won’t have to go out and purchase a new tank and instead reuse an old one.

Additionally, you’d be surprised at the number of vapers with a cupboard full of old equipment which is still in great condition and can be donated to users in need of hardware. These are all crucial variables in reducing wastage.

This one is as simple as it sounds, with the vast majority of products packaged in fully recyclable cardboard which can be easily disposed of cleanly and efficiently. As stated previously, our jiffy green bags are biodegradable, a huge positive for the environment.

Switching Up Your Eliquid

There’s been an increase over the last few years of particular eliquid brands which use natural alternatives to PG (Propylene Glycol), such as vegetol a type of vegetable oil which is solely produced from plant-based ingredients. Although PG isn’t seen as a significant contributor to fossil carbon dioxide emissions, it is viewed as a petrochemical due to deriving from petroleum. We stock the popular Kind juice, as well as the premium French brand Curieux which feature vegetol.

It’s also worth mentioning that some eliquids with a large amount of flavouring have an increased sugar content which naturally kills coil much faster than simple flavours. As a rule of thumb, menthol or tobacco flavours usually have the longest lifespan which transpires to them needing to be replaced less often. Likewise, eliquids which use alternative sweeteners as a substitute for sugar will also improve the lifespan of your coils.

On the other hand, those who vape nicotine may find it useful to switch to a higher nic strength meaning you’ll vape less and in the process save on eliquid and plastic consumption. One way to achieve this is to change to a salt nicotine eliquid which naturally has a higher ratio of nicotine but also a faster absorption into the bloodstream, meaning cravings will decrease significantly. As well as this, salt nicotine offers a smoother throat hit than standard nicotine meaning the increase in strength doesn’t constitute irritation. 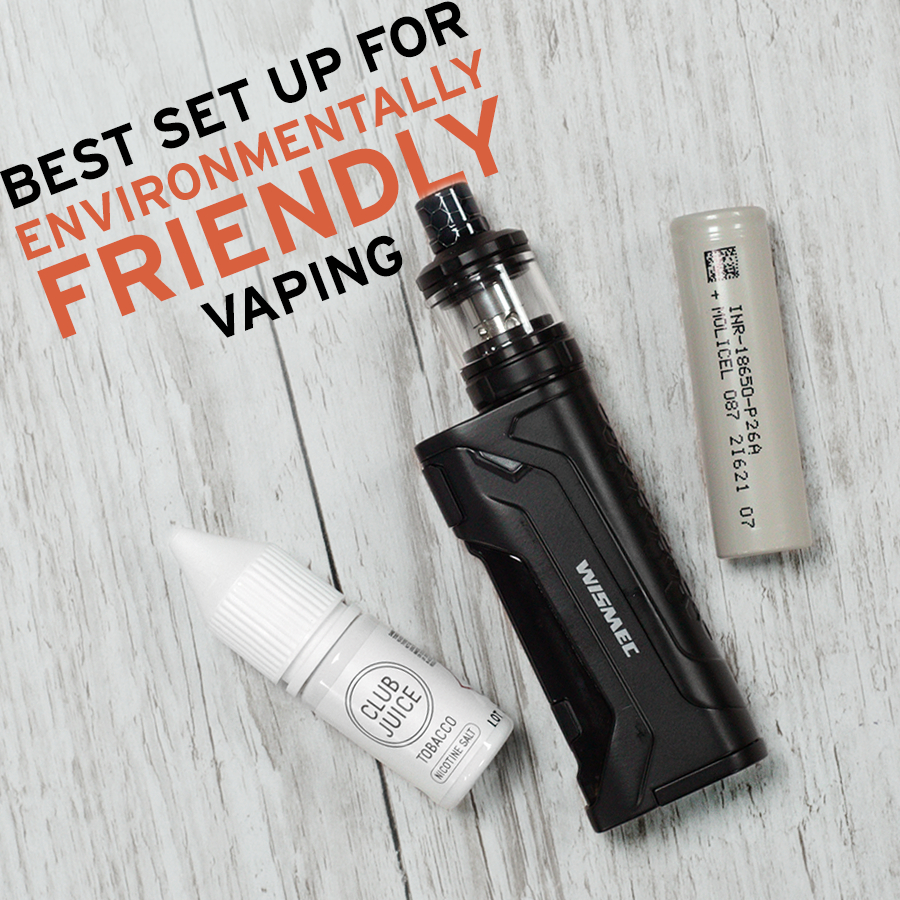 Basically, if you were to be the most ecologically responsible vaper possible, the holy grail setup would be; a low-wattage regular mod with a single removable battery, a standard glass tank with a removable coil and a 10ml 20mg salt nicotine eliquid blend with a low sugar content from the UK.

If, on average, a vaper was to go through a 10ml bottle and one coil each week (removable batteries last approximately 18 months), the overall annual waste totals at just under 1kg of recyclable materials. This would be the most beneficial and environmentally friendly way to vape.

Overall, compared to other industries, vaping remains a sustainable and eco-friendly entity which not only combats smoking healthwise but also ecologically. Saying this, like all of us, it has the power to do even more, particularly in the beginner vaper sector where the most money fluctuates yet the most waste is produced, and with a shift in the right direction this wholly possible.

For more information, visit our website www.vapeclub.co.uk or please don’t hesitate to contact us regarding any queries surrounding eco-friendly vaping or vaping in general.