Whether users are trying to give up cigarettes or simply change smoking habits, vaping has exploded in popularity. So where could call itself the UK’s vaping capital?

We analysed sales data from March 2018 to March 2019 to work out the UK’s vape capital. As well as answering that question, we discovered plenty of preferences for flavours you might not expect along the way.

Hertfordshire is the vaping capital of the UK

By looking at the number of Vape Club sales in a region, we used a mathematic formula to create a score out of 100 for each area and worked out where vaping is most popular in the UK: the quiet county of Hertfordshire. Situated just north of London, there are more sales per person among Hertfordshire’s population of 1,180,900 than anywhere else in the UK.

Although places like London (5th place) and Hampshire (4th place) buy more, they also have larger populations. Meaning that when you look it in terms of proportion of people, Hertfordshire is the spot that’s maddest about having a vape.

Rounding out the top five are: Somerset, Northamptonshire, Hampshire, and London. All are in the south of England, or the Midlands, which was true of the majority of the top 20; North Yorkshire, Cumbria, and Scotland were the only places ‘up north’ that feature. Wales and Northern Ireland don’t make an appearance.

So how much did everyone buy? Hertfordshire vapers ordered £37.38 worth of vape liquid and more, on average. That lagged behind only four places: London (£40.67), Kent (£37.63), Worcestershire (£37.54), and Surrey (£37.52). Across the top 20, the average spend per order in each area varied wildly. Various places, although they had fewer sales per person, had higher average spends than those further up the table.

Most popular flavours in Hertfordshire

With Hertfordshire being the UK’s vaping capital, we looked deeper into our sales data to find out what flavours you’re most likely catch in the air – should you pay a visit.

Menthol is the most popular, while a variety of fruity flavours also come high up the rankings, such as strawberry, lemon, raspberry, and mixed berries. Tobacco is in sixth place, a flavour that stays a little closer to the taste of traditional cigarettes – and suggests there might be a good few people in Hertfordshire trying to kick the habit.

That said, some unexpected flavours are quite popular too, with pastry taking 10th place, while ice/slush was in 11th. But, of course, you can’t beat the classics: cream was in 3rd place, vanilla was 4th, caramel was 13th, and custard 16th.

Overall top flavours in the UK

So what is the UK vaping? We looked at the most popular flavours in the UK as a whole to see what people like best, and how this compares with our leader, Hertfordshire.

Once again, menthol topped the list, while tobacco was in fourth. Four of the top 10 proved a preference for fruity flavours is a countrywide trend, with strawberry, raspberry, mixed berries, and lemon all appearing. Blueberry and apple both fell just outside the top 10, in 11th and 12th place respectively.

However, less tropical flavours, such as cream, vanilla, and mint, get added to people’s orders a lot. Ice/slush also just made it into the top 10.

There are many other unusual flavours that could be a growing trend, out of Vape Club’s data on over 130 flavours. Pastry proved to be 14th most popular flavour nationwide, while nut was 28th, aniseed/liquorice was 29th, and coffee was 38th. 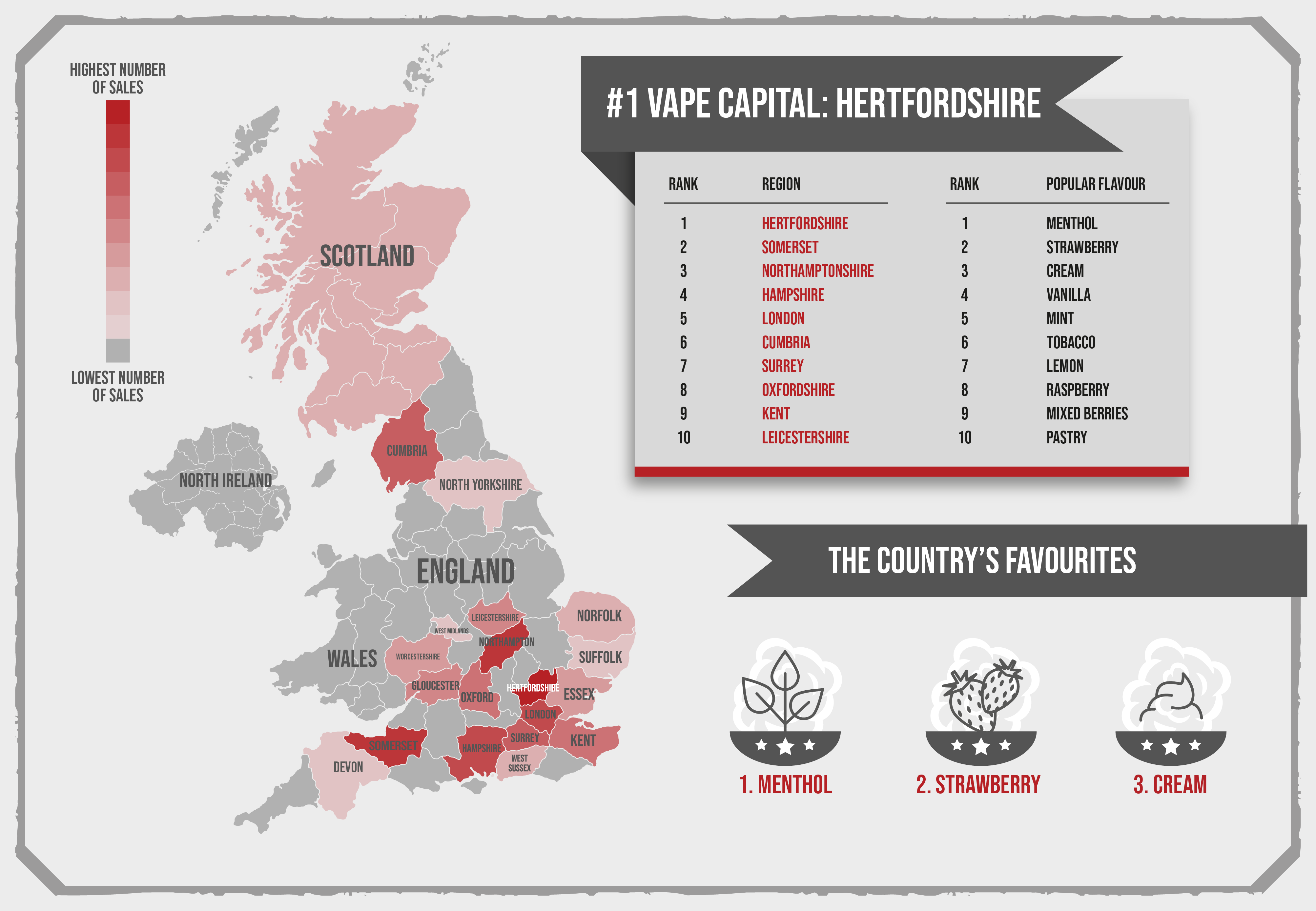 In a 2015 evidence review, Public Health England estimated that vaping is roughly 95% less harmful to your health than smoking cigarettes. Add to that the wide array of flavours available compared to traditional smoking, it’s possible that many people may switch their packets of cigarettes for an e-cigarette.

Although the south of England and the Midlands are where vaping is currently most popular, according to our sales figures, perhaps this trend could grow over time throughout the rest of the UK.

If any of the flavours we’ve talked about have caught your eye, then browse our range of e-liquids.