It seems a lot of our attention is turned towards the San Francisco vaping ban at present, yet this event is undeniably a huge chapter in the history of vaping and could be a potential precursor of things to come in the future. So many controversial subjects are intertwined in the legislation, most of all the alleged ‘teen vaping epidemic’, yet the recent news of tobacco companies profiting in stock shares makes for alarming reading.

We break down just how and why this ban is ironically helping tobacco companies grow in economic stature, more so than what they already are, and what this means for vaping worldwide, particularly in the UK where vaping is still perceived in a positive and beneficial light when compared to smoking.

Tobacco has and will always be one of the biggest and most viable recession-proof products. On global stock exchanges throughout multiple recessions, tobacco companies have been some of the most consistent beneficiaries of financial global chaos. During the most recent crisis of 2008, U.S. stocks fell a whopping 27% between August 2007 and August 2010, yet tobacco stocks were largely unaffected as if nothing had happened. Think about it, when the world's melting in front of our eyes, the chances are a large number of people are going to light up and watch it burn. 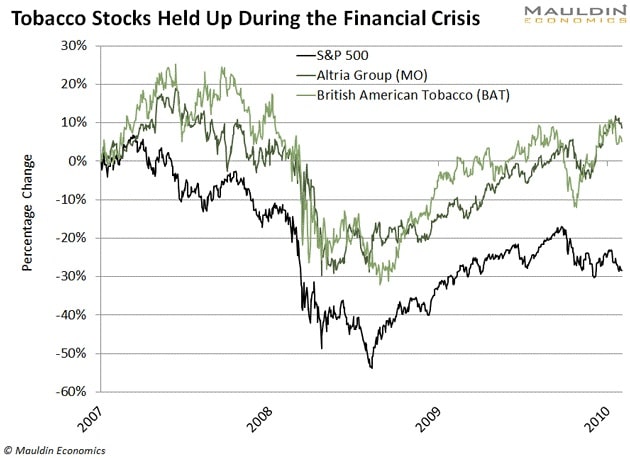 This will never change, especially as cigarette manufacturers offer the holy grail of a predictable dividend yield of approximately 4% or more, meaning they’re about as safe as England not winning the FIFA World Cup every time out. What’s more is that even though tobacco consumption faces a decrease in use globally, as well as constant campaigning against from citizens and governments, manufacturers enforce not only tax rises to smokers but also impose an additional price increase on products consistently to compensate for the inevitable loss of sales year on year. This is how tobacco companies remain the giants they are and ultimately it’s the public which fuel their existence.

As well as this, taking away one of the most successful ways to combat smoking, in e-cigarettes, is only going to turn ex-smokers back to tobacco of course. The economy expert Robert Ross sums it up perfectly, ‘’This might sound counterintuitive, but vaping bans could actually boost a company like Universal Corporation (one of the world’s largest tobacco merchants). E-cigarette regulations can’t hurt the company. Perversely enough, they might even help, as smokers return to traditional cigarettes if and when e-cigarettes become harder to buy.”

What This Means For Vaping

It needs to be stated that although many countries including Argentina, Thailand and Qatar have banned e-cigarettes outright, the blanket ban on sales and distribution in San Francisco caused shockwaves due to its surprise element. Yes, the US are in the midst of a crackdown on e-cigarettes mostly down to the fear of youth vaping, yet in turn it’s very unlikely that this will result in anti-vaping laws being passed through in multiple European countries.

On the other hand, if we were to look at the vaping industry from a business perspective, it can’t be denied that the market has taken a hit from the San Francisco ban, which was even further compounded by JUUL Lab’s CEO Kevin Burns personal apology to parents whose children have used the product.

It’s of even further concern when Universal Corporation’s shares have risen by 4.1% since the ban was announced, replicating the rapid jump achieved by BAT (British American Tobacco) who grew by a staggering 6.9% in shares last September when the FDA (Food and Drug Administration) announced warning letters, related to teen vaping, were issued to e-cigarette manufacturers and retailers.

These numbers suggest an industry in decline, yet here in the UK, vaping’s success has largely been down to public health bodies, such as PHE, NHS, Cancer Research and The British Lung Foundation, advocating for its use to help quit smoking which has seen the sector expand year on year in both credibility and economically. With more research consistently being pumped out outlining vaping’s positive effects when compared to smoking, hopefully soon vaping will be seen in a much more positive light on a social and political level across the world.

For more information, visit our website www.vapeclub.co.uk or please don’t hesitate to contact us regarding any queries surrounding the vaping sector or vaping in general.