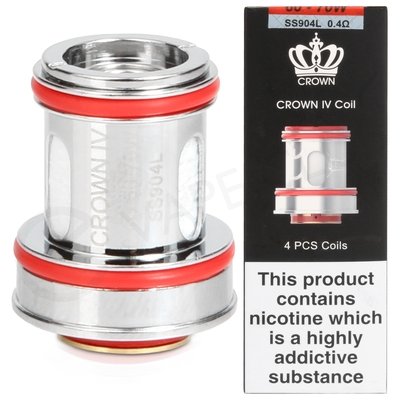 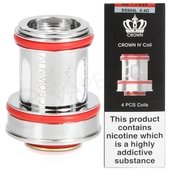 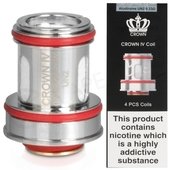 In Stock
Order by 2:30PM for same day dispatch & tracked next day UK delivery.* FREE when you spend over £20!
Price Match Guarantee
We will never be beaten on price! Terms & conditions apply.

Any coil that registers below 1.0 Ohm, is known as a sub ohm coil. Recommended for advanced vapers only, they'll require more power to use properly, which will be provided by an advanced vape kit.

By Joe from Bramford

By D from Manchester

I think these are probably the best coils, in my opinion, available at the moment.

I don't think they're as good as the crown 1 and 2 coils, but they're still fantastic. The crown 4 coils last ages, and give you a fantastically smooth flavour. The whole crown tank system is amazing. I've never had a leak, they're easy to clean, and they don't spit juice at you when you hit the button.

By Dazza from Herts

Too date the best tasting and longest lasting coil I have had. I always buy these now!

By J from UK

These coils are very good. They last for ages and have extremly nice flavour.

Having tried both the ss coils and the mesh I can say the mesh are definitely the superior of the two, flavour is consistently spot on and they do seem to last a few days longer than the ss coils. Both are good choices but personally I’d recommend the mesh

Great flavour, and the quality you expect from Uwell. Def be buying again

These have great flavour they really do!... However, they could last a bit longer in my opinion. Normally get a solid week out of them

By Mr Vape from West Midlands

The coils are amazing for flavour and cloud production. However, they could last a bit longer. I'm getting 5 days max off them.

By Watermelon Lover from Uk

By Jesse from Devon

These are a lot better than all the other coils you can get for the crown 4. They give you way better flavour and seem to allow better airflow. Will only be using these for my crown now. Only thing they could improve on is the duration as they don't seem to last quite as long as some of their other coils.

By Harry from Walton On The Naze

Genuine coils From uwell very nice. Decent flavour and long life. I recommend the un1 and un2 for ultimate flavour and cloud. I do think the price needs to come down a bit tho on such a consumable product. 8/10 because of the price

By SSM from Keighley

The flavour is incredible. Highly recommended in my top 3 coils for flavour. Would have preferred slightly bigger clouds like a fireluke coil but flavour is spot on. The leak prevention system is very innovative and does a great job of limiting leaking from condensation build up in the airflow. These coils also hit harder then they are rated for.