The ‘Smokefree by 2030’ Target Predictor: Where In England Will Hit The Government Target?

First announced as a government target in July 2019, the ‘Smokefree England’ initiative is an ambitious programme to reduce smoking prevalence to a low enough level by 2030 that it can be deemed an ‘unusual habit’ that is no longer normalised in society.

Using the most recent PHE data showing the smoking prevalence and ‘quit rate’ in each county and unitary authority, Vape Club have used government data to predict where in England will be first to be officially ‘smokefree’.

An area is considered to be officially ‘smoke-free’ if smoking rates fall below 5% – and this will be achieved if former smokers have either quit or are using ‘reduced risk’ forms of smoking such as e-cigarettes and vaping.

Some councils have responded more warmly than others to these goals. Oxfordshire, for example, has already set out its own plans to become England’s first smokefree county by 2025 – although findings indicate that it’s not currently on course for this target.

The government has acknowledged that achieving the 2030 target across England will be “extremely challenging”, especially in areas of deprivation or among people with mental health problems – and the data proves this.

Hammersmith & Fulham Set To Be The First Official ‘Smokefree’ Area In England - Where Else Meets The Target?

Only four out of 134 areas in England (representing 3% of the population) are on track to become smokefree by 2030.

According to the PHE data, the London borough of Hammersmith & Fulham is set to be the first area in England to hit the ‘Smokefree by 2030’ target, hitting the target five years early in 2025. The reason for this is its high quit rate – 7.54% of smokers in the borough quit smoking every year. Only five years ago the area was reported to have one of the highest smoking rates in the capital.

County & Unitary Authorities Set To Be Smoke-Free By 2030

Following behind and second overall is another London borough – Westminster, which is on course to be smokefree by 2028. The other two areas set to beat the deadline are in the North West of England – the Wirral and Sefton, each of which will be smokefree by 2029.

A carefully managed approach to stop smoking services, full support packages for those wishing to quit and a willingness to embrace effective cessation methods such as vaping are all factors in the high quit rates in these areas. 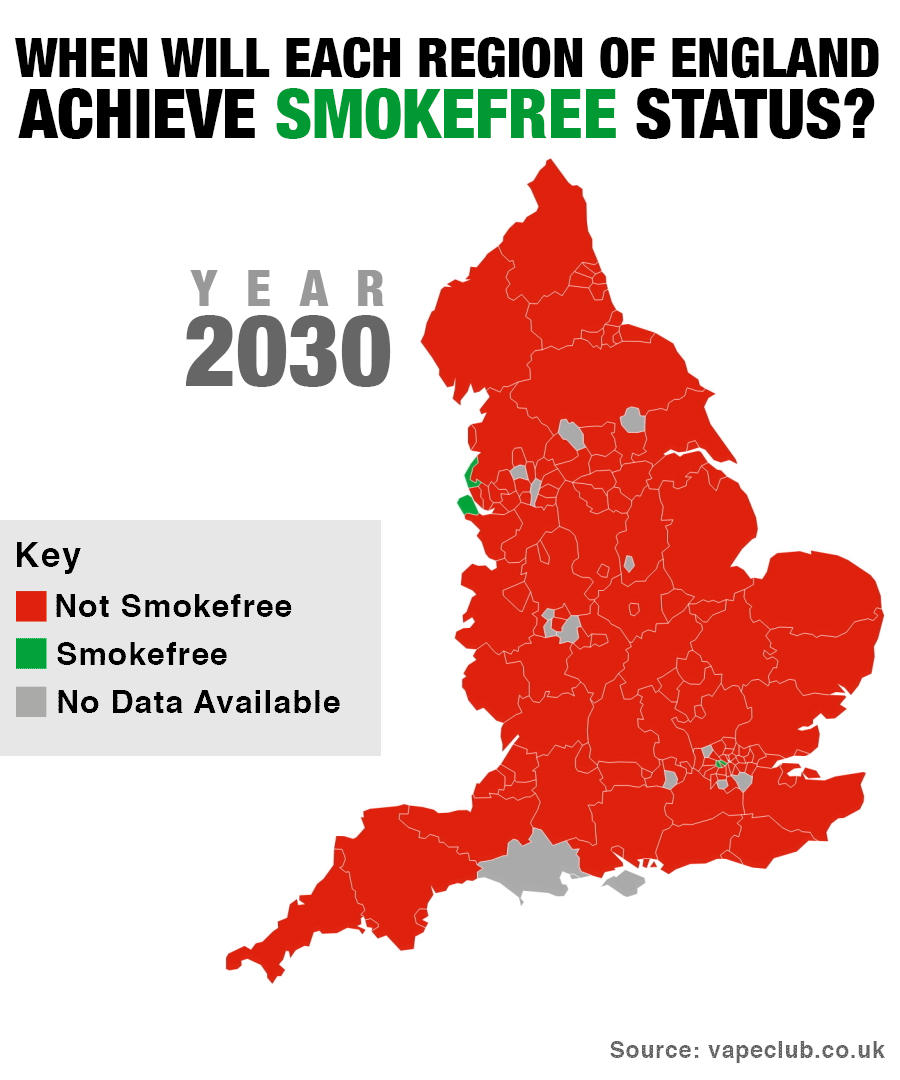 Havering Set To Be The Last To Be Officially Smokefree In England - Where Else Performs Poorly?

What these regions all have in common is that they suffer from cripplingly low ‘quit rates’. Cuts in funding for smoking cessation services are undoubtedly linked to these concerning figures – but much more can be done if representatives from these areas were to embrace vaping, which is proven to be the most successful and effective method for quitting smoking. The 2030 target is not out of reach. 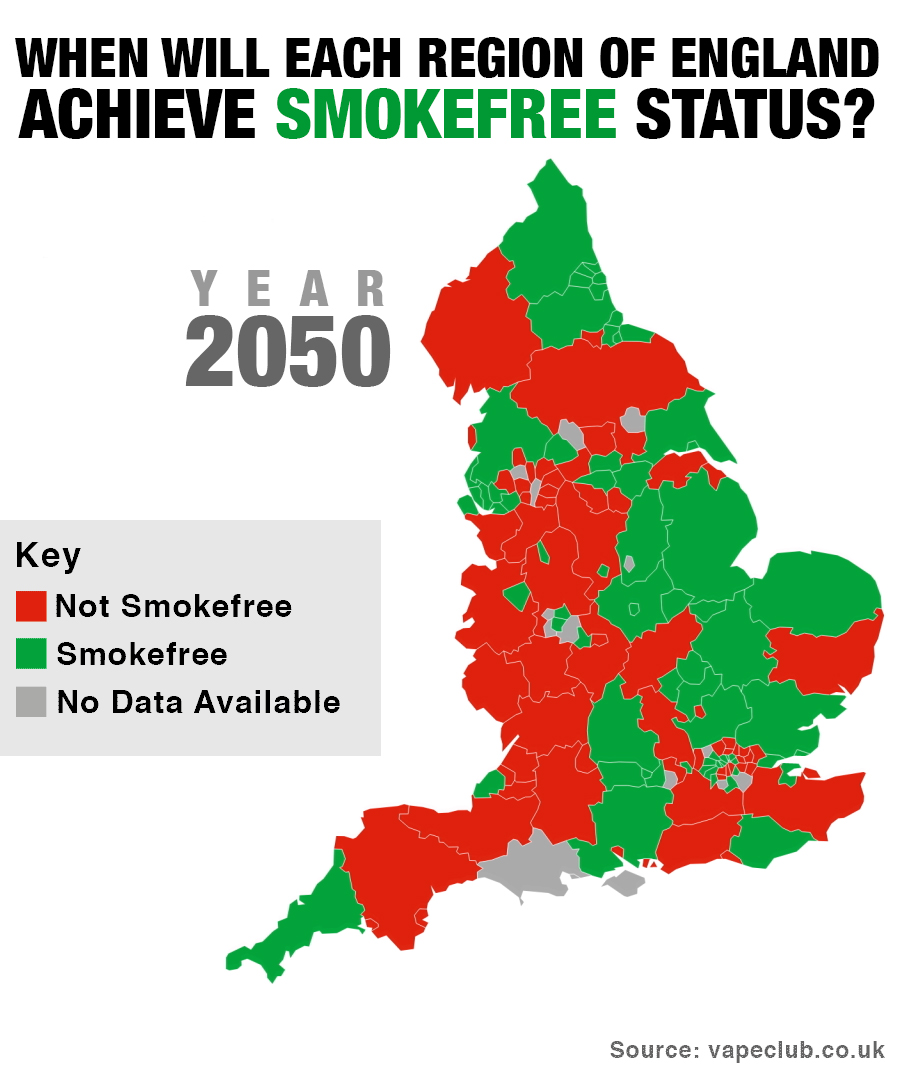 What Does England Need To Do To Hit The ‘Smokefree By 2030’ Target?

As it stands the UK is set to hit the target by 2051, so England will need to increase the average quit rate by threefold – immediately – in order to meet the 2030 'smokefree' target.

The closer we get to the target the further away it gets, with the current number of annual quitters in England 124,000. This would need to become 371,000 per year to stay on target.

A new government review from February 2021 states that achieving the 2030 target will require greater resources – actions needed include developing a new tobacco control plan, reviewing vaping regulations to ensure they help smokers quit and addressing the lack of a medicinally licensed product.

The highest quit rates (74%) were achieved when the attempt involved people using a licensed medicine and a vaping product one after another. In every region in England, quit rates involving a vaping product were higher than any other method. These ranged from 49% in the South West to 78% in Yorkshire and the Humber.

Government data shows that in 2019, vaping prevalence among adults in England was: 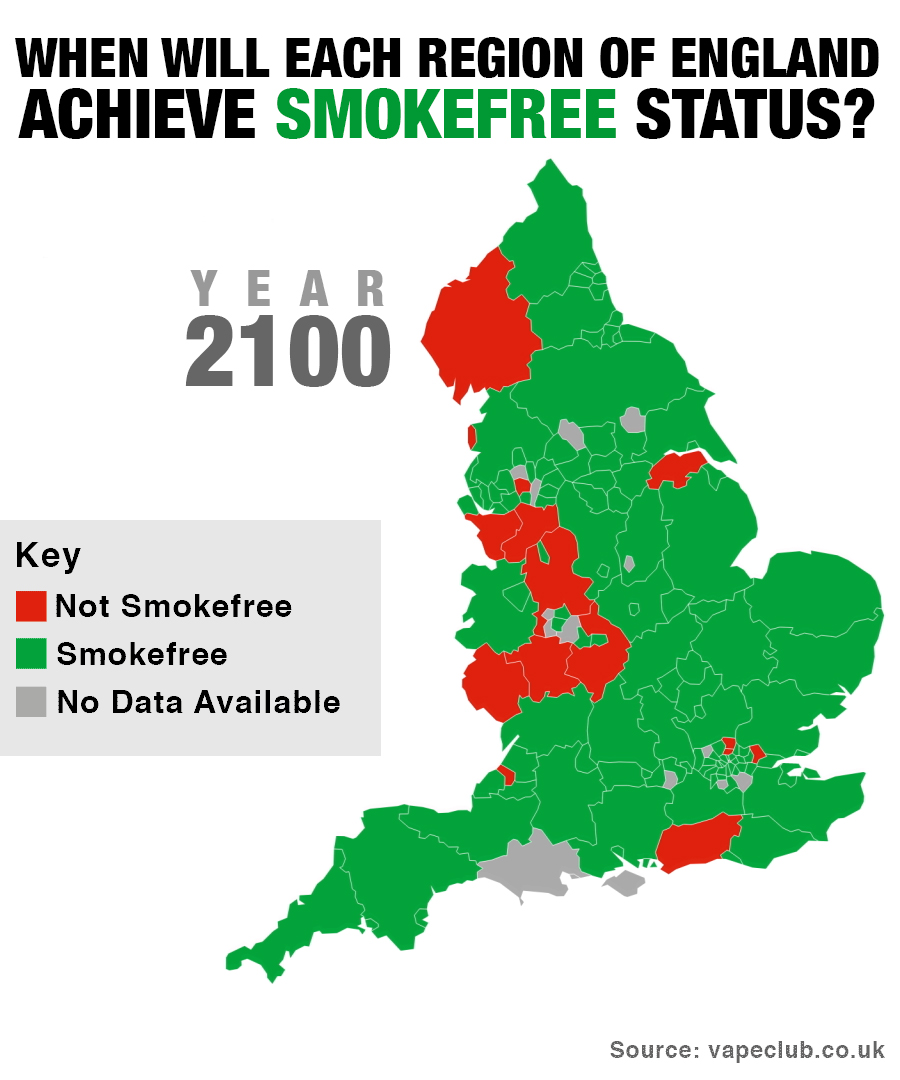 What Are The Costs Of A Missed 2030 Smokefree Target?

The costs of having a society in which smoking continues to be normalised after 2030 go far beyond the clear public health implications for each person who continues with the habit. The financial impact of smoking on the government and NHS annually, as detailed below, is vast.

In addition, with smokers taking roughly six days’ worth of cigarette breaks every year, the impact on company productivity cannot be underestimated. These are the hidden costs of smoking and underpin just how detrimental it is to a healthy and productive society – making the 2030 deadline even more urgent.

How Much Do Smokers Cost Society Each Year, And How Much Will Be Lost By Not Hitting The 2030 Target?

Data from the charity ASH (Action on Smoking and Health) reveals that smokers cost £12.6 billion to services and workplaces in 2018, which equates to £1750 per smoker. We’ve calculated updates to these figures based on 2020 smoking rates, giving a clearer picture of the consequences should the 2030 deadline be missed.

If smoking prevalence continues at its current rate and England is not smokefree until 2051, this will mean the government deadline is missed by 21 years. The cost of this will therefore add up to:

How Much Could Local Councils Save Through Smoking Cessation?

Every single smoker that makes the decision to quit makes a smokefree England in 2030 more likely to be a reality, meaning a healthier and cleaner future.

The total saving that a single person can make per year adds up to £1750. This consists of:

On average, each local council could make significant savings of up to £1 million per year by encouraging and investing in smoking cessation to an extent where the 2030 target becomes achievable. This breaks down into

Every year by which a council pre-dates or post-dates the 2030 deadline, it could either save or cost the above figures respectively.

For example, Hammersmith & Fulham is on course to be smokefree by 2025. If this happens, it could save the local council up to £4.8 million to spend elsewhere.

Ways To Quit - Where To Seek Support

We advocate for the use of vaping when trying to quit smoking, as it is twice as effective in quitting when compared to other forms of NRT (Nicotine Replacement Therapies) such as patches or gum.

If you’re a smoker looking to switch to vaping, our range of bundle kits are the ideal option as they feature everything you need to start vaping right away, including a vape kit and e-liquid. We also recommend you take a look through our detailed Beginner’s Guide To Vaping, which will give you a headstart and some much-needed knowledge in your quest to quit smoking.

For any vaping related queries, our dedicated customer service team are on hand to answer any of your questions by phone, email or webchat.

HOW TO VAPE GUIDES

A Beginners Guide To Vaping ➲