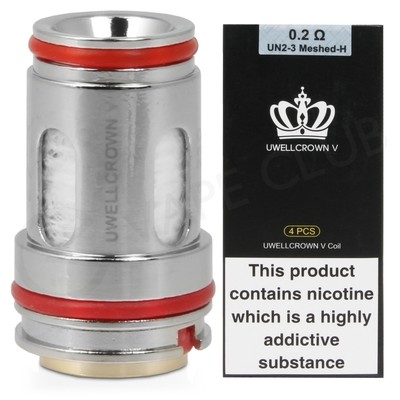 In Stock
Order by 7:00PM for same day dispatch & tracked next day UK delivery.* FREE when you spend over £20!
Price Match Guarantee
We will never be beaten on price! Terms & conditions apply.
Talk To A Vape Expert
Need some advice? Call our team on 01923 479 992 and we will be happy to help!

The Uwell Crown 5 replacement coils have been designed for use with the Uwell Crown 5 vape tank and kits that feature it. There are three varieties of this coil available, all of which have been designed to support sub ohm vaping and feature mesh builds to improve both flavour and vapour production. When it comes to e-liquid we recommend pairing them with a high VG e-liquid that is 70% VG or higher.

The 0.2 Ohm Crown 5 coils feature the lowest resistance and rely on a triple mesh build to deliver the highest level of vapour production. Capable of being used between 65 - 70W these coils can be supported by a range of sub ohm vape devices.

The 0.3 Ohm Crown 5 coils, on the other hand, feature a dual mesh build and their slightly higher resistance are more suited to delivering a balance of flavour and vapour production. They can be used between 50 - 55W.

The 0.23 Ohm Crown 5 coils offer a mid-point between the two. They utilise a single mesh build that still delivers better flavour from e-liquids but produces slightly more vapour than the 0.2 Ohm coils. They can be used between 65 - 70W.

Any coil that registers below 1.0 Ohm, is known as a sub ohm coil. Recommended for advanced vapers only, they'll require more power to use properly, which will be provided by a sub ohm vape kit.

Ez Duz It On Ice Shortfill E-Liquid by Ruthless

For a last gen tank these coils are pretty solid. Last a good time too. Decent flavour that takes a while to ramp up but when it's there it lasts.

By Grace from Bedfordshire

Good coils that produce excellent flavour and clouds, last a long while too

These coils are pretty solid, personally prefer the .2ohm and .23ohm coils, the triple mesh .3ohm isn’t for me. Last a good week with regular vaping and the flavours spot on.

By Tom from Essex