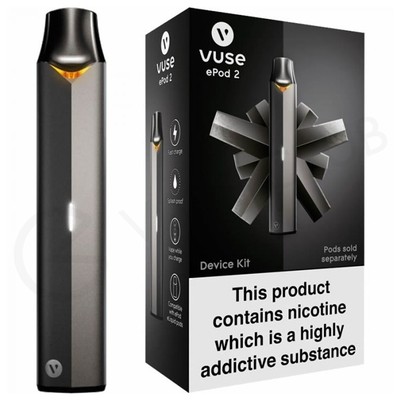 In Stock
Order by 7:00PM for same day dispatch & tracked next day UK delivery.* FREE when you spend over £20!
Price Match Guarantee
We will never be beaten on price! Terms & conditions apply.

The Vuse ePod 2 pod Device kit has been designed with a focus on simplicity and ease of use. This makes it an ideal option for anyone that’s new to vaping and for those who want a hassle free, pocket-sized vape. The high capacity 350mAh battery produces 6.5W of power on every puff, which can deliver more vaping between charges, offering up to a full day's worth of vaping. Meaning you don’t have to worry about your vape running out of charge too soon. The prefilled MTL (Mouth To Lung) Vuse pods are sold separately and come in a variety of popular flavours including fruit, candy and tobacco blends.

To ensure the ePod 2 is as easy to use as possible, it features no buttons, settings or menu interfaces. All you need to do is inhale on the mouthpiece and your kit will deliver a discreet amount of vapour, for an MTL vape that mimics the draw of a cigarette. As a lightweight kit that charges quickly thanks to its USB-C cable, it’s made for vapers on the go. The LED light will indicate when your kit needs charging, so you’re not left in the dark with no battery.

Each pre-filled Vuse pod contains 1.9ml of flavoured e-liquid blended with either freebase or salt nicotine. We’d recommend salt nicotine if you prefer a smoother throat hit or freebase nicotine for a throat feel closer to a cigarette. Once your pod needs changing, you don’t have to spend time filling up. Instead, you can just dispose of it and insert a new one, so there's no mess and very little effort when you need more e-liquid.

By Gigachad from Hull

At the moment I've been primarily using my Uwell Caliburn G. However, within the last 1-2 weeks I've been using Geek vape bars as my mate introduced me to them and they're really, really good.

I had just been paid and was waiting for my first order of Geek vaoe bars to come through. I went to my local Tesco's to get some stuff and didn't plan on getting a vape system, but this caught my eye from behind the counter so I got it..

Pod systems like these are really cheap so it makes them easy to decide to buy on the spot like I had that day.

I got chilled mint pods with them and they're really nice. I also bought some other pods and they not bad either, they're the golden tobacco ones.

At the moment, I'm using this vape pen when I get bored of what I'm using or want to change things up a bit. It's conpsreabke to the Juul but it is much better in my opinion. It stays charged for longer and even though you get 2 pods per pack, the pods are twice the size, if not 2.5 times the size. They last waaaaaasy longer than a Juul pod. Also, they're about £6 a pack at my local Tesco's. For a pack of Juuls it is £10.99. although getting 4 pods of these would cost s pound or two more, you get way, way more for your money and not only that but the flavours are better.

The device itself it a nice sleek design and has a nice weight to it. It's simple to use, you just pop the pods in and out, doesn't matter which way round they go. Compared to a Juul, you get much more of a deeper hit from them too.

I've ordered myself a pack of vanilla pods for this pod system and I'm looking forward to getting them.

There's not much to say about this pod system other than the fact that it's s cheaper alternative to Juul that's also better than a Juul. There seems to be many different flavours and I have only tried two of them. I'm looking forward to trying more if them.

I'm pretty sure the battery life is way better than s Juul too as it seems to last longer. I've not actually had it run out if charge on me yet as I've put it on charge after a certain amount of use that I believe would have it close to being needed to be charged.

So yeah. Sleek design, great flavours, large pods that last long enough to get your money's worth andplenty of flavours to chose from (if you shop online, at my local Tesco's they have mint and tobacco only.)

I'd recommend this to three types of people. Someone who wants to change things up a bit and try something new, someone who is new to vaping and wants to get into it (this would make s good started kit and would be s good introduction into pod vaping) and somebody who wants something as a backup or something to have there to mix things up when they're bored of their other flavours.

I've found its good to have devices like this around. If I get bored of what I currently have, I can go online and buy new flavours, just like I did here with this one, I've ordered myself the vanilla pods for this just to mix things up a bit. If I like them, I may even buy some more pods.

All in all its a solid device that does what it says on the tin. It's cheap enough and it certainly delivers. There are no buttons or anything like that. It's just a solid pen with a single light that turns in whilst it's charging and then off when it's finished charging. Another thing; it chargers up pretty fast as well which is another bonus.

This review isn't layed out very well and is a bit higgledy-piggledy. It's just as it's 2:13am and I'm doing reviews early in the morning when I should be asleep.

But yeah, it's a good device, I can't think of anything that's inherently wrong with it. If you want something new and/or you're bored or you're new to vaping then go ahead, give it a go!

This pod system however definitely isn't the best out there. This is just a simple one, reminiscent of the Juul (but better, like I said.) There are other pod systems that use coils and are refillable, those are much better than these ones. However, I try not to compare them in my head as they're tei totally different devices, so I'm not going to compare it. I have a Uwell Caliburn G and that is much better than this in many ways, but I won't compare it as that will just knock the score right down. When you're reviewing ejuice it's different, you can compare them and I have done in the past and comparing Ejuices to other ones has caused products to lose or gain starts from me. But I don't do that with this.

As a result, I'll give it a 10/10 for the simple fact it's essentially a Juul but better and the flavours (so far) are all really nice, it keeps its charge for a long time and it's simple & effective. I can't think of anything that's wrong with it in all fairness.

By Pez from London